Liverpool Legends are four incredibly talented musicians/actors hand-picked by Louise Harrison, sister of the late George Harrison, to honor her brother’s legacy, and re-create the band that changed the world forever. 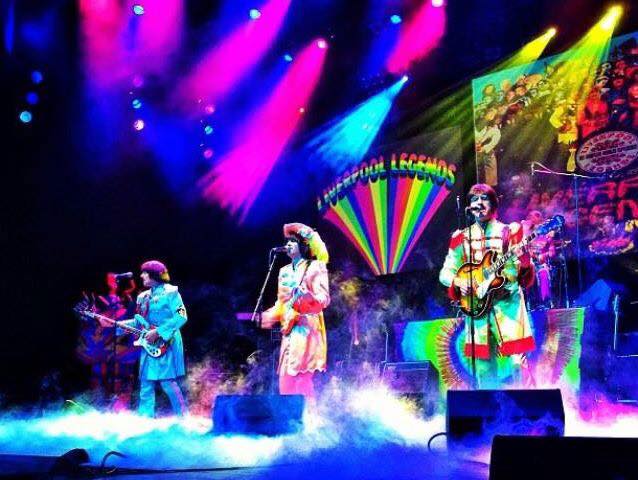 Experience the complete history of The Beatles, starting with the early mop-top hits, such as I Want To Hold Your Hand, She Loves You, and Twist and Shout. You’ll then take a Magical Mystery Tour down Penny Lane, through the psychedelic era of Sgt. Pepper. And in The End, Come Together and sing and dance to classics like Get Back, Here Comes the Sun, and Hey Jude.

This internationally acclaimed group has toured the world, with sold out performances in the US, Europe, Mexico, Canada, Israel, Ukraine, and South America. They have performed in prestigious venues such as The Cavern Club in Liverpool, Carnegie Hall, and The Rose Bowl. They’ve also recorded at the world famous Abbey Road Studios in London, and received a Grammy nomination for their work on “Fab Fan Memories – A Beatles Bond.”

Liverpool Legends have headlined their own show in Branson, Missouri since 2005. They have been awarded Best Band, Best Show, Best Tribute Show, and received the Visitor’s Choice Award for Entertainer of the Year.

With note perfect vocals, precise attention to every musical detail, along with costume changes, vintage instruments, and new state-of-the-art multi-media, Liverpool Legends will make you feel like you are seeing the real Beatles.

Come see why Liverpool Legends are captivating audiences all around the world!